I LOVE listening to podcasts every chance I get: walking the dog, exercising, driving, showering…You get the idea!

So when a Group Expert, Emma Stevens, suggested we do a public podcast for everyone, it made me jump up and down with excitement! What could be better than offering a new way of learning that they could enjoy?

The LWDG already has a private Podcast for its members. We upload all of our live coaching sessions as both a video recording and a podcast for them to enjoy.

But we have never before created a dedicated place for anyone to listen to the amazing coaching of our Group and Featured Experts. 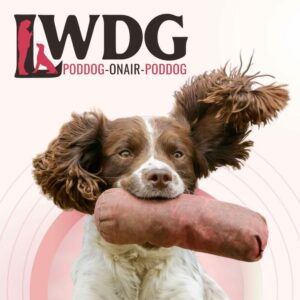 And so The LWDG POD DOG was born! A public podcast dedicated to all things working dog.

We wanted anyone to access, so it’s available here, on Apple Podcasts and on Spotify for you to listen to weekly.

Rob Alleyne is an incredibly well-respected dog behavioural trainer, and last year he did a fantastic coaching call for our members. So good, we decided we would kick off LWDG POD DOG by releasing this incredible 57-minute coaching call!

Robert is a signatory to the Registration Council for Dog Training and Behaviour Practitioners (RCDTBP), and he has lectured on canine behaviour on many occasions for different groups and organisations, both nationally and internationally.

He is a Member of the Kennel Club and is a patron of the charity K9 Crusaders. He is a keen campaigner trying to make a difference for dogs in relation to their care and welfare, is firmly against breed-specific legislation, and has attended several of the London protests against it.

He has talked on many radio programmes on the subject of dogs. He’s also appeared on numerous television programmes talking about dogs and other animals. He was the behavioural trainer on the hugely successful BBC3 show Dog Borstal for all four series. He has also appeared on BBC News, This Morning, Good Morning Britain and London Tonight, covering a variety of dog-related subjects. He has written articles for most of the major national dog-related magazines, such as Our dogs, Dogs Today, and Your Dog.

Robert has acted as an expert witness in court cases, both as a canine behavioural/trainer and as an animal welfare officer for the London Borough of Lewisham.

Having spent some years studying the subject, Robert started working as a canine behavioural trainer in 1992, with most of his clients coming to him via veterinary referral or recommendations from previous clients. He has published a book on dog behaviour and training, The Trouble-Free Dog, published in 2000, and had very positive reviews in The Times, The Telegraph, The Daily Mail and Dog Training Weekly and has been reprinted twice since then. It was revised and reprinted in 2008. He is currently writing his second book. He has also produced several booklets and pamphlets for Lewisham Council on dogs, which are distributed free to the public.

In May 1990, he began working as an animal welfare officer for the London Borough of Lewisham and continued there until January 2007, when he held the position of Senior Animal Welfare Officer. Dealing with all types of animals, ranging from escaped reptiles to injured wildlife to nuisance complaints and of course – stray dogs, which was the service’s core function. This aspect of the job was obviously potentially very dangerous, so an ability to immediately assess a dog’s attitude was essential since stray or abandoned dogs could potentially turn aggressive. He left the service in 2006 to work full-time as a behavioural trainer.